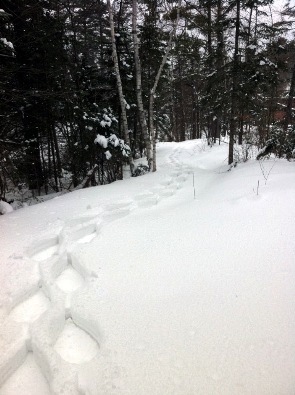 The hike will begin at the museum and last about an hour. Museum guests will be invited to return to the museum to enjoy warm refreshments and view unique artifacts discovered during state-sponsored archaeological investigations in the 1990s and 2000s.

The forge has its origins with the Jackson Mining Company. During the mid-1840s, the company hired workers to construct a dam and forge on the Carp River. There, iron ore from the Jackson Mine would be processed and made into iron blooms. The forge site was selected 3 miles east of the Jackson Mine, near the falls of the Carp River, which provided water power for the operation. Surrounding hardwood forests furnished charcoal to fire the furnaces.

The Carp River Forge settlement was the first Euro-American community in the Michigan iron region. In 1846, ordinary working people provided the knowledge and muscle needed to build and operate the forge. Residents built some 20 buildings, including a store, blacksmith shop, barns, log cabins and frame houses. The workforce included laborers, carpenters, bloomers and colliers. Many came from the ironworking regions of Vermont and New York.

During the winter of 1847-1848, 24 men and two women were at the forge. Historians know that a federal post office was established there in 1847. On Feb. 10, 1848, Ariel N. Barney hammered the first bloom into bar iron at the Carp River Forge.The product eventually proved the high quality of Michigan iron.

Ownership of the forge changed hands several times. By 1851, the forge population had increased to around 50 people. In its annual report for 1853 the Sharon Iron Company noted the forge and 20 “dwelling houses.” Other historical accounts mention at least “four fires” (forges) and sawmill on the property.

“This is a rare opportunity for museum visitors to physically visit the historic site. The Carp River forge site is the reason the Michigan Iron Industry Museum is located where it is; the museum interprets the pioneer enterprise, as well as the iron industry in Michigan as a whole,” said DNR historian Troy Henderson.

The Carp River Forge Historic Site was added to the National Register of Historic Places in 1975.

For more information about the snowshoe hike, call Troy Henderson at 906-475-7857 or email him at hendersont7@michigan.gov.

The museum entrance is located on US-41E, 1 mile west of Junction M-35, in Negaunee Township. Admission is free, but donations are encouraged.

The Michigan Iron Industry Museum is one of 11 nationally accredited museums administered by the Michigan Historical Center, an agency within the Department of Natural Resources. During the winter months the museum is open Monday through Friday, from 9:30 a.m. to 4 p.m., and the first Saturday of each month. For more information call 906-475-7857 or visit online at www.michigan.gov/ironindustrymuseum.

The Michigan Department of Natural Resources is committed to the conservation, protection, management, use and enjoyment of the state’s natural and cultural resources for current and future generations. For more information, go to www.michigan.gov/dnr.