On a sky-blue February morning, with sunlight just hitting the tops of the trees, a sizeable crowd had gathered in the courtyard at the Howell Conference and Nature Center, located northwest of Detroit in Livingston County. 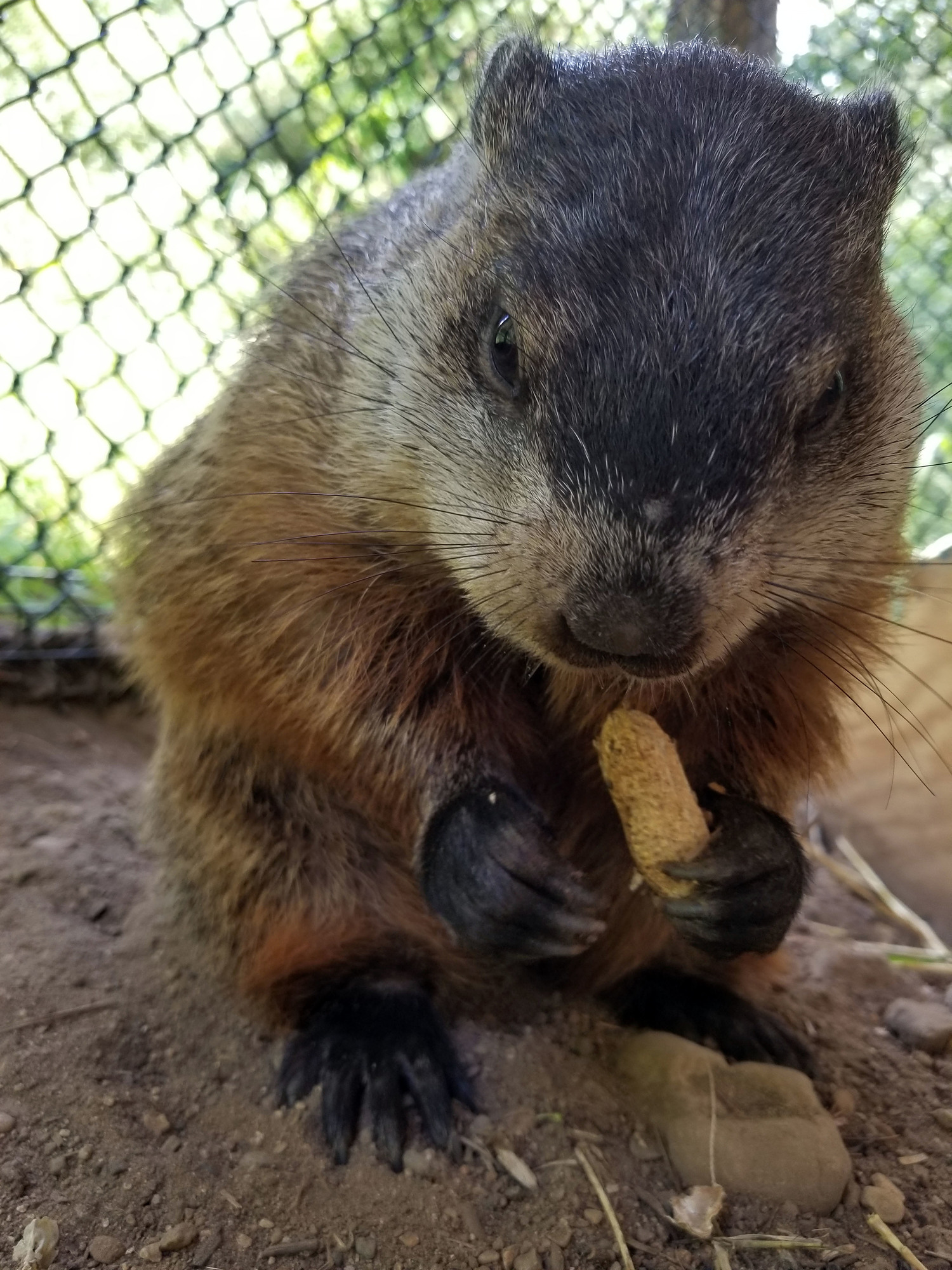 The scene was festive, although a bit odd, with some people dressed in Hawaiian hats, shirts and leis, waiting for Michigan’s official groundhog to waddle out of its house and predict whether there would be six more weeks of winter.

It was a chilly day, a winter coat day. A man’s voice from a loudspeaker declared, “The moment is here.”

Excitement was building among the schoolchildren, parents and others huddling together just a few feet away from the viewing platform.

Check out this sidebar story on Michigan’s woodchucks.

The prognostication, of course, is determined by whether the groundhog sees its shadow, which portends another six weeks of the year’s coldest season. No shadow signifies an early spring.

A small, but stylish, single-story, wood-sided house sat on a portable stage, amid rows of blooming blue, yellow and orange plastic flowers, a Christmas tree left over from the holidays and at least one plastic palm tree.

This home belongs to Woody the Woodchuck, or groundhog. Woody is a she and was born in the spring of 1998 and brought to the nature center’s Wildlife Clinic in June of that year.

“She will be 20 years old this year. We think it is because, like the Easter Bunny and Santa Claus, prognosticating groundhogs live forever,” said Dana DeBenham, the nature center’s wildlife director. “She was rescued by a farmer’s wife after her husband had shot the mother and the young pup came crawling out of the burrow.

“The woman kept Woody a bit too long and she became tame, preventing her from being released to the wild. Her favorite foods are bananas, peanuts, rodent blocks and corn on the cob, though she has to eat her leafy greens to stay in good shape.”

No doubt the crowd shows up at the nature center for the free continental breakfast, the kids’ costume contest and the chance to be there in person among the many revelers waiting for Woody’s wisdom to foretell the future.

“She’s checking you all out, looking at the clouds,” DeBenham said. “So, we’re ready to do this? Ready, set and go.” 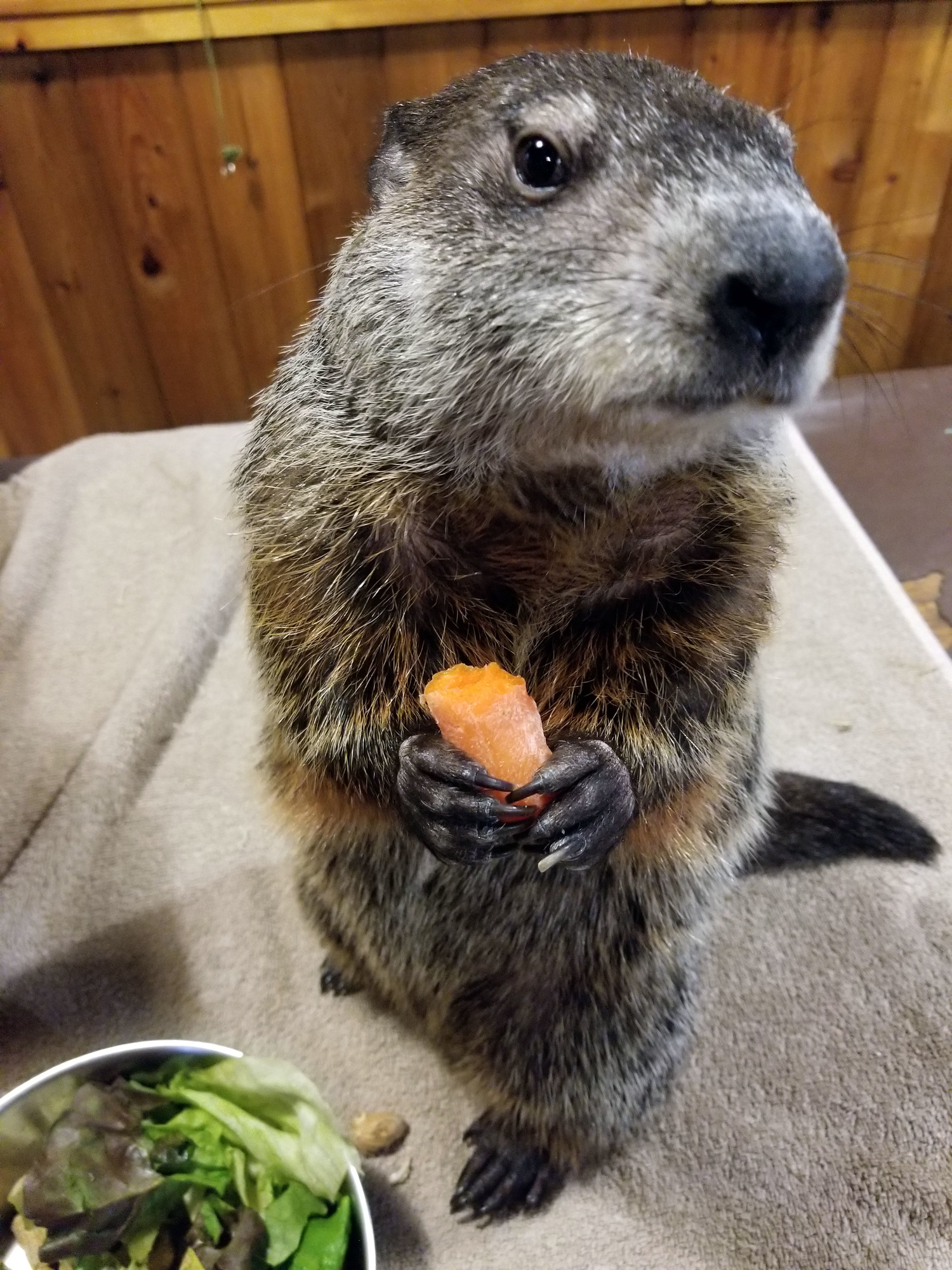 In 2017, Woody made a brief appearance in the arms of a DeBenham before retreating to her home, where she would stay. Having seen her shadow, the seemingly bothered groundhog retired to the warmth of her house.

The year before that, Woody stayed indoors again while the crowd shouted down a timeclock to a deadline for the prediction. Six more weeks of winter again.

“Her record is impressive! After a correct call last year of ‘six more weeks of winter,’ her record now stands at 15 correct predictions out of 19. This year will be her 20th prediction,” DeBenham said. “We do allow the groundhog to actually make the prediction by putting her in her ‘faux stump’ and giving her 30 seconds to emerge.

DeBenham suggests Woody’s proficiency with prognostication may be linked to her gender.

“We think Woody is exceptional at weather-forecasting because she is female and has that woman’s intuition about such things,” DeBenham said.

The Groundhog Day event has become increasingly popular at the nature center over the years, with as many as 150 spectators in attendance.

Watch videos of the Howell Nature Center’s prediction festivities from February 2017 and 2016.

See more information on the 2018 Groundhog Day Celebration at the Howell Nature Center.