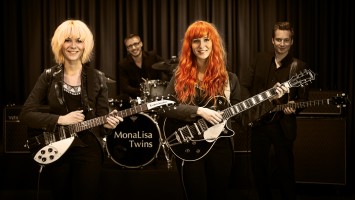 The Mona Lisa Twins debuted at #1 in the UK and #20 globally on the ECMA Charts. Musik Radio Promotions began a global campaign of their single, The Wide Wide Land, and immediately began receiving an enormous amount of airplay.

The MonaLisa Twins, with 19 year old twin girls named Mona and Lisa being the core of the band, are one of the very few modern groups who write original songs in the 60′s Beat music tradition, reviving the genre with a fresh twist without sounding pop-ish or trivial. On their debut album “When We’re Together” (2012) they present finest Rock ‘n’ Roll and Beat music, skilfully venturing out in Psychedelic, Folk and even Latin genres, inspired by the likes of The Beatles, Bob Dylan and Simon & Garfunkel.

Their signature features are polyphonic harmonies and a wiry, bright guitar sound. The even mix of fun and depth in their music and lyrics brings back the spirit of this time and therefore speaks to a wide range of international audiences, especially on the Anglo-American music markets. They’ve already played lots of live-shows, and their high quality music videos have garnered a total of over 2 million views and thousands of subscribers on YouTube and Facebook so far.

Musik and Film president Stephen Wrench says “We are thrilled with this news and it proves that our Musik Radio Promotions system is working better than ever, we look fwd to seeing the girls move to new heights in their carreer”.