On the M-109 loop that runs between Empire and Glen Arbor in Leelanau County, along the Lake Michigan shoreline – near an area once touted as the “Most Beautiful Place in America” by ABC’s “Good Morning America” show – stands a stately sign that marks the forward-thinking of more than a century ago that recognized Michigan’s need for a statewide parks system.

Just about anyone who’s traveled the state’s byways and highways over the last 50-plus years likely has encountered a marker or two, and for good reason – Michigan’s historical marker program is among the nation’s oldest. 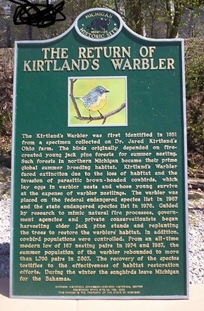 Since it was authorized by the Legislature in 1955, the program has approved and placed more than 1,700 markers throughout the state, as well as in several other states (for example, in Kentucky at the Perryville Battlefield State Park, honoring the Michigan soldiers who aided the Union in this pivotal Civil War battle) and in Europe (at the home of Antoine de la Mothe Cadillac, the French explorer who founded Detroit).

Although a marker can’t tell the full story – after all, the text is limited to a few hundred words – it does provide a great starting point to learn more.

Historical markers originally were placed at highway rest areas, in state parks, and at locations where historic events occurred. Today, historical markers can be found nearly everywhere, including the sides of buildings, the yards of residences and businesses, and at schools.

Clark said that Michigan’s earliest markers focused on European settlement, geology, geography, Native peoples and military conflicts, but, as the program grew, it began to commemorate historically significant architecture, the contributions of individuals, and other milestones.

Stop in at the I-75 rest stop south of Grayling and you can read, briefly, about one of Michigan’s greatest wildlife conservation stories. The “Return of Kirtland’s Warbler” historical marker explains how the bird nearly became extinct in the mid-20th century as logging and other industries damaged its natural habitats, but then successful habitat restoration and conservation efforts turned the tide. The marker reads, in part: 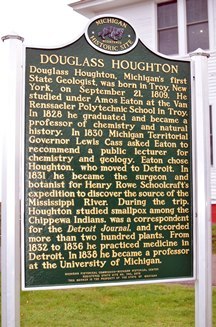 “… Guided by research to mimic natural fire processes, government agencies and private conservationists began harvesting older jack pine stands and replanting the trees to restore the warblers’ habitat. … From an all-time modern low of 167 nesting pairs in 1974 and 1987, the summer population of the warbler rebounded to more than 1,700 pairs in 2007. The recovery of the species testifies to the effectiveness of habitat restoration efforts. …”

Visitors to Eagle River on the Upper Peninsula’s Keweenaw Peninsula can see the “Douglass Houghton” marker that honors the man who served as Michigan’s first state geologist. It was an 1841 report from Houghton, describing the U.P.’s copper country, that convinced hundreds of people to flood the Keweenaw in search of copper fortunes. The marker also highlights several of Houghton’s other contributions, including studying smallpox among the Chippewa Indians, serving as a correspondent for the Detroit Journal, and recording more than 200 plants.

One of the newest markers, installed just this past July, highlights the civil unrest in Detroit in 1967. The marker was placed on the site where the rebellion and riot began, now occupied by Detroit’s Gordon Park, on the 50th anniversary of the uprising. It sets the scene:

“In July 1967 the civil unrest that had been spreading across the United States reached Detroit. In the early morning hours of July 23, Detroit police officers raided a blind pig, an illegal after-hours bar, where patrons were celebrating the return of Vietnam War servicemen. …”

Clark says it’s this diversity of moments, milestones and memories in our state’s history that makes the markers compelling reading for both historians and citizens. Now, with the launch of a new web-based tool, Clark hopes even more people will get in on the hunt for the markers. 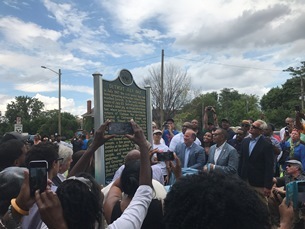 Until recently, curious Michiganders have relied on a list or a book – and a lot of good, old-fashioned exploring – to find the state’s historical markers. Then staff at the DNR and the Michigan History Center put their expertise together to find a way to make it easier than ever for folks to find and learn about the markers and the history they honor.

The result? A new, interactive website (www.michigan.gov/markers) that can be accessed by phone, computer screen or tablet – no special app required.

“The Michigan Historical Commission originated and pushed for this project, and DNR technical and history staff made it happen,” said Clark. “We hope this historical marker database will pique the curiosity of Michiganders, help Michigan travelers better connect to the communities they visit, and inspire everyone to keep learning more about the real stories that make up Michigan’s fascinating past.”

Once on the website, visitors will find an interactive map that shows marker sites across the state. A search box at the top right corner of the map makes it possible for users to find markers near their homes, businesses or vacation spots.

On the map, each marker is represented by a small green icon. When a visitor clicks on an icon, a menu box with title and address information pops up. The pop-up box includes clickable links that enable a visitor to zoom in on the map, learn more about the marker, or get driving directions to the marker using Google maps.

The detail link provides specific information about the marker, including its location and installation dates, an image, and the marker text. Visitors also can download a PDF copy of the marker information.

But the website is much more than just a map, said Mary Patrick, Michigan Historical Marker program coordinator. 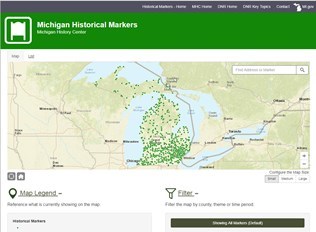 “This research tool is full of features that make it practical for students, researchers, trip planners and other explorers to find historical marker information that will interest them,” she said.

For example, the filter feature (located below the map) enables visitors to pull out map results by county, theme or time period. Clark said the theme filter is particularly handy for planning road trips around topics of interest.

“If someone is interested in the early auto industry, they can select that filter to find all the markers related to that topic and use the directions feature to plan the ultimate Michigan automobile road trip,” she said.

The website also includes the ability to customize the view. Visitors can switch the style of the map by clicking on different options – from road to topographical – in the basemaps feature.

The map defaults to show only the markers, but visitors also can add state parks and campgrounds, as well as Michigan’s network of rail trails, making it easy for families planning a Michigan vacation to map out a trip incorporating visits to historical markers close to where they will be traveling.

Ortonville resident JoAnne Brodbeck is one such traveler.

“My 11-year old son has become a big history buff,” Brodbeck said. “This summer we took a trip to Mackinac Island, and read every marker he stumbled upon. I showed him this website, and he was very excited. It will make it possible for him to find and map out markers before our next vacation.” 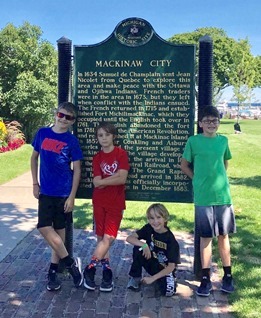 Brodbeck said she also plans to keep the website in mind when looking for history topics for school projects.

The Michigan Historical Marker website also was built with researchers and marketers in mind. The database upon which the map is built is available as a free download (either as a KML or CSV file) on the marker main page. It is made available as part of the DNR’s Open Data project (http://gis-midnr.opendata.arcgis.com/), which provides accessible, high-quality information and analysis to drive informed decision-making.

Patrick said that although the marker website is live, there still is information to add, particularly photographs of all the markers. DNR staff are field testing and updating the database this fall, continuing to add photographs and verify information.

Michigan History Center staff also would love to hear how others are using the website.

“We encourage visitors who don’t see a marker in an exact GPS location to look around and see if it’s nearby,” Patrick said. “If they can’t find it, we hope they will let us know.” Patrick said the best way to share that information is by using the contact form link at the top of the marker website’s main page.

“There’s something fitting, and exciting, about using the latest technology to help share the pieces of our past, making these important stories more accessible to more people,” said Clark. “As information is added or updated, it will be right at users’ fingertips – we’re putting history in your hands.”

For more information, visit the historical marker website at www.michigan.gov/markers.