Northern Michigan University students Brandon Bissell of Adrian and Justin Brown of Bear Lake finished first among 82 teams at the 2015 Carhartt Bassmaster College Series Midwestern Regional. The fishing competition was held on the Mississippi River, spanning both Wisconsin and Minnesota waters. The duo took a strategic risk on the final day to secure a come-from-behind victory and a spot in July’s national championship. Their three-day total of 44 pounds, 3 ounces was about 3 pounds more than the second-place team.

“When it was announced that we had won, I was overcome with a slew of emotions that are almost impossible to describe,” Bissell said. “It took everything I had just to keep myself from weeping with joy on stage. I had been preparing for that very moment my whole life because I had been bass fishing competitively with my father since I was about 5 years old. Since then, it was always my dream to win a major tournament. It finally happened.”

Brown also began fishing at a young age with his parents. The two men became good friends last semester as members of the NMU Bass Fishing Team, a club sport at the university, but had never shared a boat before the regional. Three allotted practice days leading up to the tournament allowed them to become acclimated to each other’s fishing techniques and the water. They formulated a game plan after exploring where the bass were and what they were biting on. The duo had the best results casting hollow-bodied frogs on the water’s surface near shallow vegetation.

Bissell and Brown were trailing the leaders by 14 ounces heading into the final day. They knew a national championship bid was virtually guaranteed because the top 13 teams would advance. But rather than coast to the finish, they were determined to win it all. They took a risk that revolved around a variance in state regulations and vaulted to the top spot.

Culling—replacing smaller fish with larger catches—is illegal in Minnesota. Once teams reached the daily limit of five fish in their live wells, they couldn’t cull the smaller bass.

“The first two days, we would catch five in Minnesota waters, then go to the Wisconsin side where culling is legal and finish the day there, swapping for larger fish if we caught them,” Brown said. “We knew most of our better fish that week were coming out of Minnesota waters, so on the final day we started there as usual. Instead of hitting the limit and moving on, we decided to release smaller fish before we hit five. We were taking a risk that we would catch bigger bass and still hit the day’s limit. You don’t get many opportunities to win a big one, so we were willing to take a chance and it paid off for us.”

The NMU duo and the remaining top 12 teams from the regional will compete in the Carhartt Bassmaster College Series National Championship July 9-11 on Lake DuBay in Stevens Point, Wis. 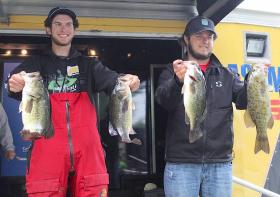 Pictured with some of their haul are NMU students Justin Brown (left) and Brandon Bissell. Photo by Shaye Baker.

Full story can be found at: http://www.nmu.edu/communicationsandmarketing/news-releases?articleID=173096