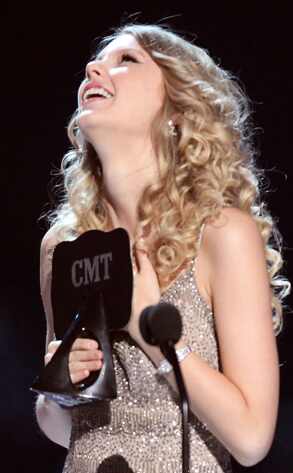 TAYLOR SWIFT was living a dream last night at the 2009 CMT Music Awards, which might as well have been called The Taylor Swift Show. In addition to winning Video of the Year and Female Video of the Year for “Love Story,” Taylor performed twice and opened the show with a special humorous montage that made it seem as if everything Taylor dreams suddenly comes true. One of those goals was to star in the latest Star Trek movie, and suddenly Taylor was wearing Spock ears, flirting with Spock himself and vaporizing show host BILL ENGVALL when he tried to give her flirting tips. Taylor also fulfilled her big goals of becoming a Tennessee Titan and rapping with a little vocal help from R&B singer T-Pain. He worked in “Love Story” to the hardcore tune, which featured Taylor rapping about her mostly quiet lifestyle. She even got bleeped at one point, which puzzled her since she claimed to only say “Yo.”

Taylor’s first performance of the evening was her latest hit, “You Belong With Me.” In a nod to the video, Taylor began the performance sitting on a bed wearing her bathrobe and glasses, but quickly ripped it off to reveal a blue dress. A squad of cheerleaders then flooded the stage and backed her up with a dance routine. DEF LEPPARD joined Taylor for the night’s closing performance, “Pour Some Sugar On Me.”

Before her Def Leppard performance, Taylor thanked her heroes GARTH BROOKS and SHANIA TWAIN for setting great examples for her to follow. She also thanked her brother AUSTIN for being her date to the awards show.